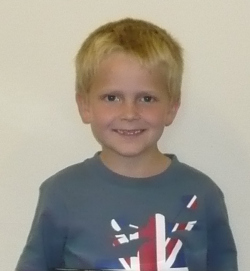 It is better to build children than to mend adults!
Quote Source: (variation) The National Crime Prevention Council of Canada

These are some of the comments we have received from parents of children we have tutored.

Click on Tom's photograph (right) to read his testimonial.

Katy continues to enjoy her tuition and her schoolwork has improved a great deal. Aged 8, Year 3

Charlie has progressed a lot in school and become more confident. Aged 8, Year 3

Brandon is thoroughly enjoying his lessons. Overall he is more confident and received all 'A' grades in his end of term school report. Thank you for all your help. Aged 9, Year 5

Elizabeth’s English is still the area she is struggling with, but she does seem more positive about it. Aged 10, Year 5

Marcus is very happy attending your classes and expressed concern when a school concert jeopardised his attendance! Your work is definitely increasing his confidence, thank you. Aged 9, Year 5

Harry’s Maths has gone through the roof! Aged 9, Year 5

Jack really enjoys his lessons; he looks forward to Tuesday afternoons. Since he became a student of John Cashin Tuition, I have seen him grow in confidence and his work at school has definitely improved. Aged 9, Year 5

A Year 3 girl was behind and struggling in both Maths and English and showing a slight “defeatist” attitude. Her schoolteacher had told her mum that her writing was unreadable. By the end of her first Term with us, mum said, “She sits writing stories in bed and is much more confident.” By the middle of the second Term with us she was helping other children in her class at school. This made her feel really good about herself. The defeatist attitude has vanished without a trace and she has begun Year 4 a happy and confident little girl.

Mum says Chelsea cannot believe that she cannot come next week because it is half term. Aged 8, Year 4.

Stephen's mum asked us to concentrate on Maths only, as he was very weak in this subject. Three months later, the same boy achieved A* in Maths at his school. Aged 10, Year 5

Sophie's mum says that she has been moved to the top table in Maths by half term, after joining us in September. Aged 9, Year 5.